The Bradbury family took home a Solid Blue Boy and called him Mani.

After meeting a Blue French Bulldog in a park 2 years ago we had been obsessively researching the breed and breeders and even borrowed a Frenchie on ‘Borrow My Doggy’ to make sure the breed was the right fit for our family. On one of my obsessive internet searches I stumbled across Marc and Blue Frenchies UK. From the very first message and subsequent phone calls I knew we had found the most reputable and very best breeder we could ever have hoped for. Not only have we been blessed with our most amazing beautiful Mani Marley we have also made friends for life in Marc and Nicola.

The Blue Frenchie Family is literally a family and having had Mani for over 2 months now, Marc is still on hand at any time of the day with any questions we may have. I cant imagine buying a French Bulldog from anyone else and I actually feel sorry for anyone that hasn’t managed to find Marc in their searches!

Marc didn’t mind my constant requests for pictures and videos of Mani and we really felt like we had bonded with Mani even before we brought him home because of the contact we had had. He became famous in our neighbourhood before he’d even arrived with people messaging me to find out when he was arriving in the lead up and even now we cant leave the house without being stopped constantly with people pouring over him and wanting cuddles. Mani absolutely loves everyone we meet and I haven’t met anyone yet that isn’t blown away by him.

We first took Mani to the vet for his injection and the vet commented that he has never seen a puppy pack or pedigree certificate like Mani’s and that he is extremely well bred, confident and a very well socialised puppy.

The trainer we use for Mani is overwhelmed by his temperament and commented that he has never seen such a healthy French Bulldog in his 30 years of puppy training.

Mani’s puppy name given to him by Marc was Marley and in testament to them and the amazing start to life they have given him we decided to call him Mani Marley in full because we wanted him to keep a part of Blue Frenchies UK in his name. He is the most beautiful boy with an amazing character and so loving and fun. His quality is incontestable and his outgoing personality is captivating.

We are all obsessed by Mani and have already spoken about having a brother or sister for him. We would never consider going anywhere other than to Blue Frenchies UK and we cannot recommend them enough. 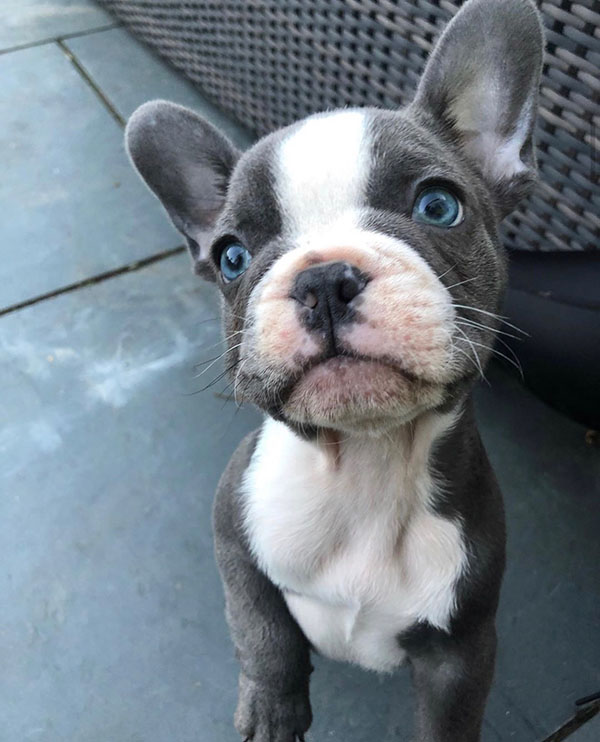 Our summer 2022 litter is ready to graduate this w

Our Fluffy Boy Yogi Bear is available after a chan

Our last 2 available male puppies are ready to go

PROTECT YOUR FRIENDS. Its not COOL to take your do

A pair of our 9 week old male puppies! Those eyes

Mummy snugs are the best 🐶 • #bluefrenchiesu

You lookin at me? 🤨 • #bluefrenchiesuk #blue

This website uses cookies to improve your experience while you navigate through the website. Out of these cookies, the cookies that are categorized as necessary are stored on your browser as they are essential for the working of basic functionalities of the website. We also use third-party cookies that help us analyze and understand how you use this website. These cookies will be stored in your browser only with your consent. You also have the option to opt-out of these cookies. But opting out of some of these cookies may have an effect on your browsing experience.
Necessary Always Enabled
Necessary cookies are absolutely essential for the website to function properly. This category only includes cookies that ensures basic functionalities and security features of the website. These cookies do not store any personal information.
Non-necessary
Any cookies that may not be particularly necessary for the website to function and is used specifically to collect user personal data via analytics, ads, other embedded contents are termed as non-necessary cookies. It is mandatory to procure user consent prior to running these cookies on your website.
SAVE & ACCEPT